The Paducah and Lake Erie was conceived as a coal-hauling short line set in southwestern Pennsylvania, and this is the first and primary loading facility on the railroad. The tipple was purchased several years ago at a sale in which the modeler was getting out of HO scale. 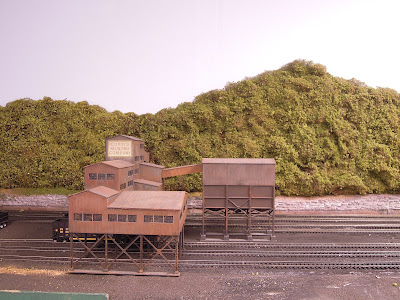 The forest behind it was created with a combination of Scenic Express Super Trees, MicroMark poly fiber, and Timberline Scenery Co. ground cover/foliage, all mounted on the pink insulation foam board. This process is very similar to that described by outstanding modeler Dave Abeles on his blog about building his Onondaga Cutoff. 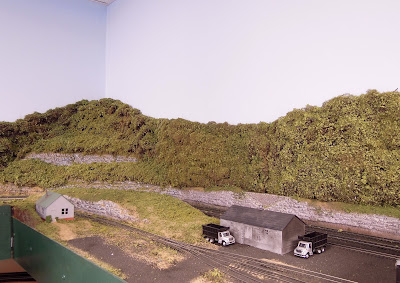 The rock walls in the scene are carved into the pink insulation board material, and then painted with acrylics. Ground cover is a combination of Woodland Scenics fine ballast cinders, Scenic Express fine natural soil and dirt, and the ground cover/foliage as used in the forest. Mounds are made by carving stacked pink material. The track is painted with black semi-gloss Rustoleum.

To the right of the top photo is the entrance to the helix, which will be covered primarily with forest and several company houses.
Posted by Unknown at 11:55 AM No comments: 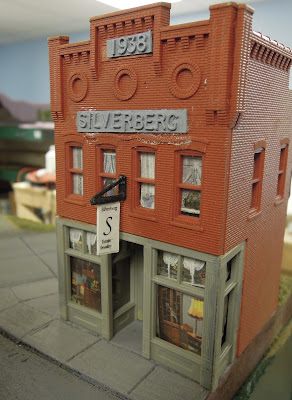 Building three at "friends corner"is named for good friend Allan Silverberg of Lexington, KY. Note the building name is "Silverberg" and the date of the building is 1938, his birth year. Although Allan and I have known each other only about 10-12 years, through happenstance we found that we were born a year apart in the same hospital in Hammond, Indiana! And to further the irony, we discovered our fathers both worked at Sinclair Oil Refinery in East Chicago, Indiana, at the time.

You should also note the sign for the business identifies "Silverberg Estate Jewelry". Although he spent a major portion of his working life as property developer for fast food chains, in the last few years, Allan delved into estate jewelry, specifically antique cuff links. In my "make believe" world, Allan owns the building. named for his family, runs the business, and lives in the second floor apartment.

Silverberg Estate Jewelry joins "Nancy's Diner" and "Heyl's Classic Cars" at "friends corner". There remains a fourth building on the corner to be named. This corner is just behind Freytag Engine Shops, built by and named for the late MMR Dean Freytag.
Posted by Unknown at 11:19 AM 1 comment:

I outlined in a previous post my thoughts about "friends corner" and started the area with Nancy's Diner. Now comes a second addition to the area behind the Freytag Engine Facility, Heyl's Classic Cars. 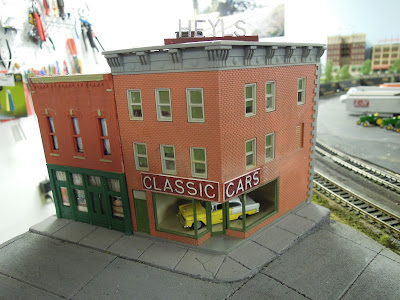 Ken Heyl is a good friend from Ashland, Ohio, and largely responsible (or to blame?) for my getting involved in building a model railroad. His first love is railroading, but a close second is classic cars. Ken owns both a virtually-all-original '68 Plymouth Road Runner, and a '40 Buick funeral car which has the body by the Flxible Company of nearby Loudonville, Ohio. He shows one or the other of the cars at "cruise ins" once or twice weekly throughout the summer. Ken is also the "designer" of Heyl Interlocking on the lower level of the Paducah and Lake Erie. Featured in the window here is a '55 Chevrolet Bel Air. Two buildings remain to be named in this small area.

These "named" places join previously introduced James Creek Railway, named for David James, owner of Brecksville Road Transit (BRT) of Brecksville, Ohio. In a previous P&LE iteration in Ohio, the James Creek was a short line to the coal mines. Here, the mines are off line, and the two power units will work the coal tipple and yard. 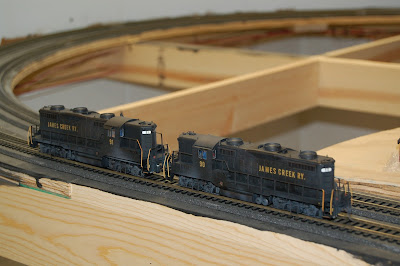 Posted by Unknown at 8:18 AM No comments:

Like a lot of towns, my version of Paducah has an informal area that is known by a
identifying name recognized by the residents but not shown on any map. It can sometimes be a street, or a block, or even several blocks. Here, it's known as "friends corner", and will have several businesses named after friends. The first to take shape is Nancy's Diner (shown here). 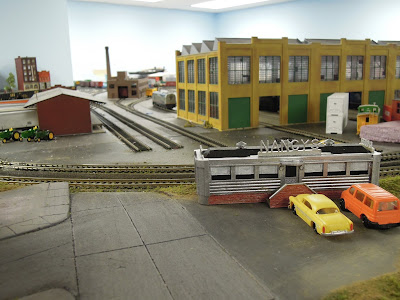 The story behind Nancy's is that shortly after we moved to St. Louis in 2008, Nancy and her husband Bob stopped by on their way home to Ashland, OH from a western trip, and brought to me an HO scale vintage baggage car. In recognition, I wanted to make a diner and name it for Nancy. But, it didn't look right (not enough windows); thus, I got a diner, repainted and changed the signs, and here it is. There is still some detail work and window treatment to go, but it looks good. The baggage car will become a tool shed at CP Tipton (Nancy's maiden name), and other buildings are in the process of being finished for "friends corner."
Posted by Unknown at 11:07 AM 1 comment:

I am changing to IntuiSwitch controls for my turnouts, and am in the process of installing them. This is a product of ESELCO, from Lenexa, KS, (info@intuiswitch) and developed by Sheldon Levy. As you can see from the photos, they are push button operated, and flush mounted directly to the fascia, a primary reason I am making the change. In addition, they come with the route marked, red and green lights indicating the divergent and main routes respectively. They have been relatively easy to install, and early on, I am most happy with them. 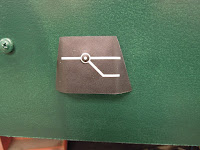 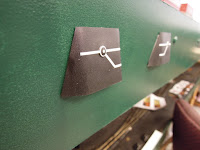 In addition to the individual switches as shown above, the company makes custom panels to handle yards or multiple tracks, with the route lighted, once set. 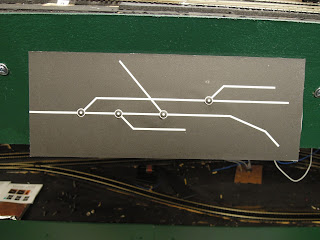 I am using the IntuiSwitch connected both to Tortoise and SwitchMaster turnout motors. Since on the P&LE, I originally had installed toggle switches as controls, the change over was simple, changing just four wires from the original setup. One note of caution, these switches require more power than my original toggles, and I am installing additional power sources (wall transformers) and removing the switches from the Digitrax track buss.
Posted by Unknown at 8:13 AM No comments:

The latest addition to the P&LE is painted fascia, painting thanks to wife Sue. The reason for adding and painting fascia at this point in the project is the pending installation (starting Friday) of flush-mounted IntuiSwitches to operate the turnouts. More on the IntuiSwitches in a future post. 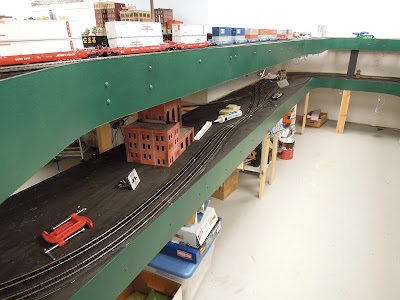 Obviously, there is a great deal of work to do, but we are making progress. We are in the process of completing a diner, named for a friend, and a retail store, also named for a friend. Hopefully, in the next couple of weeks, we'll be ready to show photos of those completed "businesses." 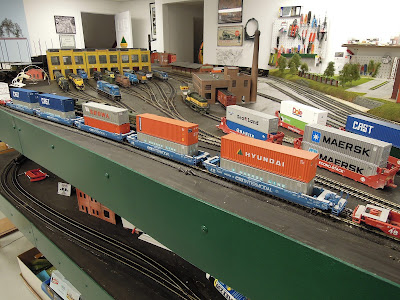 Another view of the fascia; I'm quite pleased with it. While far from finished, it does give the look of a real model railroad. The fascia is Masonite and five inches wide. We first applied an undercoat of Kilz grey primer, and then painted it Hemlock Green. Both coats were applied with a smooth (as opposed to the normal fuzzy) 6" roller. This scene is overlooking the Paducah Engine Facility, and the engine house is thought to be the final major project of late modeling icon Dean Freytag. It was built specifically for the P&LE.
Posted by Unknown at 1:09 PM No comments:

Paducah is starting to take shape.The three hotels in these photos are (from left) Hotel Paducah, Irvin Cobb Hotel, and the Jackson House. None of the buildings are prototype, but the Cobb Hotel and Jackson House names are authentic to Paducah. 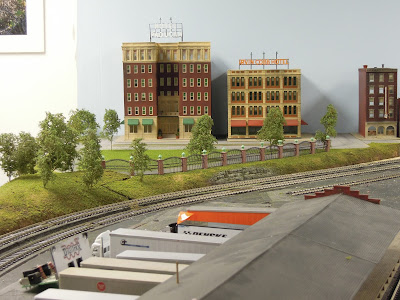 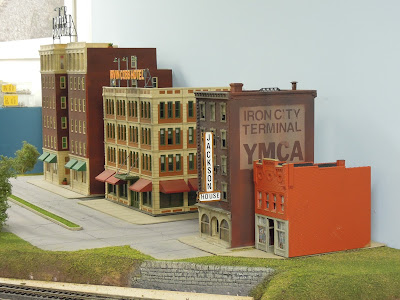 This view provides a better look at the hotels themselves, the street in front, and the stone retaining wall. Signs and lights on the hotels, the street and sidewalks, and the retaining wall which is carved into the pink foam material and painted, are all the work of John Ellenbracht. The trees in the park, which for the present is being called Paducah Park (compliments of Ken Heyl) are Scenic Express, and I think they look great. I was aware of the material, but John recommended them highly and about the same time, outstanding modeler Dave Abeles also was most enthusiastic about them on his Onondaga Cutoff. The three hotels are from the late Dean Freytag's railroad; the fourth building obviously needs some work to fit into the scene. People and vehicles are next.
Posted by Unknown at 12:34 PM No comments: